My heart and thoughts have been with Tibet and its people in the last few months. Everyday I do something to help bring awareness to the grave situation there or how I value their culture who is under threat.
Many important events are occurring on a world wide scale and it feels like this time we might achieve to build some real pressure. I have joined the global project Candle for Tibet and so have Friends of Tibet in Iceland. I encourage you to participate on a personal or grand scale:)
The World's Greatest Light Protest for Tibet grows even greater

All out light for Tibet in the 24 hours preceding the Olympic Games.

Candle for Tibet asks people to put the candle in their windows, desks, or anywhere else where other people will see it and hopefully do the same. Many will participate in candle vigils throughout the world.


CFT is calling on All Light artists in the world to create light shows for freedom.

CFT calls the people of the world to take part by lighting candles, flash lights, lighters, car headlights and any other light source.

CFT calls for all those who plan to attend the opening ceremony in Beijing to light a candle, flash light, a lighter or even a cell phone during the ceremony.
Posted by Birgitta Jónsdóttir at 9:29 AM No comments: 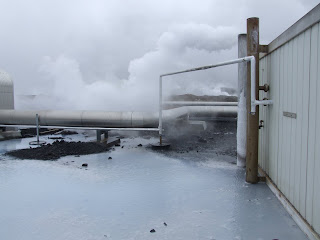 That is the smell me and my older son inhaled yesterday while taking photos in one of them bizarre places on my island of extremes. Got some great photos but I don´t think I will ever go out of the car again in that place:)

I have been rather silent because I got so much on my plate these days... seems like all the rotten things of society are surfacing and when you see something rotten - well i tend to have a need to do something about it.

I have hardly written anything apart from things that are linked to this situation of general rotteness - but there are many beautiful aspect to this - i feel that people are awakening - so i share with you my old poem - Wake up - enjoy until next time:)

I have seen signs
the end of the world
as we know it
has begun.

Don't panic
it might look terrifying
on the surface
but inside every human being
a choice
to go under
or flow.

Generate the capacity for love
for compassion in your heart.

Now is the time
to wake up
to the call of growth
and unlimited love
to all that life is.

So wake up, wake up now.
Posted by Birgitta Jónsdóttir at 1:29 PM No comments: