Concern over China's conduct in Tibet Raised in Icelandic Parliament

In a proposal moved in the Icelandic Parliament by Birgitta Jónsdóttir with support of 15 other parliamentarians from all parties in the Icelandic Parliament, expressed deep concern over the escalation of violence and repression by the Chinese authorities against the Tibetan people, that has led to more then 30 Tibetans, mostly monks and nuns, who self-immolated in despair since 2009.

The proposal condemns the growing violence at peaceful protests in Tibet, as was the case early this year when 6 protestors where killed and over 60 wounded by Chinese security forces, according to reports by human rights groups.

This parliamentary proposal urges Chinese authorities to halt the forced reeducation on monks and nuns in Tibet where they are forced to condemn H.H. Dalai Lama and denounce him as their spiritual leader, despite the integrated role he plays in their religion, and not complying means the monks and nuns are faced with serious punitive consequences.

The Parliament urges Chinese authorities to stop the enforcement of the Tibetan Nation to assimilate into Chinese culture, for example by ensuring Chinese as their prime language, where Tibetan children are forced to learn and speak Chinese instead of their native Tibetan language.

The Parliament urges Chinese authorities to lift the military siege of Tibet and allow international journalists to travel to the areas in where the self-immolations were frequent in Tibet; to end the forced settlement of nomads; and that journalists be allowed to report unrestricted and without intervention of authorities.

The Parliament urges the U.N. to send a mission to investigate alleged human rights violations against the Tibetan people, such as forced sterilization on Tibetan women, forced settlement of nomads from their natural habit to isolated settlement camps, torture and murder of prisoners, and to investigate what happened to the people who have vanished in relation to arrests of people during the uprising in 2008.

The Parliament also urges the United Nations to exert their influence upon the Chinese authorities to resume formal negotiations with the Envoys of H.H. The Dalai Lama.

The Icelandic Parliament proposal recommends that the Government of Iceland offers Iceland as venue for the resumption of negotiations between Chinese authorities and Envoys of  H.H. The Dalai Lama, for example at Höfði, the venue where Gorbachev and Reagan had their peace talks, who marked the beginning of the end of the cold war.

The resolution was first moved the same day as the Prime Minister of Chine paid an official visit to Iceland by invitation of the Icelandic Prime Minister, the 20th of April 2012. Thus we could use that as means to get the issue of Tibet on the agenda during the official visit, inside parliament and in the mainstream media. The Speaker of the Icelandic Parliament refused to allow us have the proposal debated.  I organized protest outside the Gala Dinner for the Chinese Prime Minister, I was of course not invited even if I serve currently as a Chair of the Movement, all the other Chairs of the political parties were invited. 100 people showed up to the protest, including Friends of Tibet in Iceland and Amnesty International in Iceland to voice our concerns for human rights violations in China and Tibet.

Here is a video and some photos from the protest. 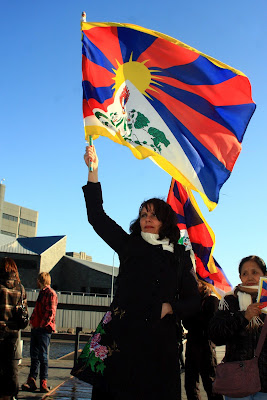 China Prime minister in Iceland - and people protest Mr. Wen Jiabao,Prime minister of China is on a official visit to Iceland . He came today,and had a meeting with the Icelands Prime Ministe , Johanna Sigurdardottir. People came to protest China´s reputation in human rights matters. A member of the Icelandic parliament , ms. Birgitta Jonsdottir,attended , and protested China´s occupation on Tibet. You can see here on video number 2. she is holding the Tibetian flag and shouting at the Harp,where Ielands prime minister having dinner with her Chinese counterpart. When the came to the Harp,icelands concert hall,for the dinner, they went into the building through a back door . They did not enter like the Icelandic Prime minister, through the front door. 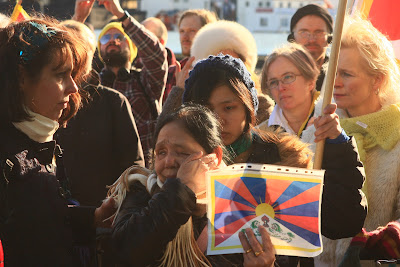 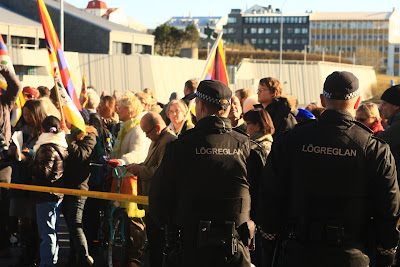 Posted by Birgitta Jónsdóttir at 11:14 AM

No mention at all of which country started the abuse http://en.wikipedia.org/wiki/British_expedition_to_Tibet Perhaps someone needs to aplogise for setting a bad example in 1904.