One of the bands that had the greatest influence on me during my rather stormful eventful sometimes dark teenage years was Joy Division. I would sink myself into the current of the music, try to pull out the lyric poems and feel as if this music was the only thing that was the same entity as I was during this time. As if it has a life on its own and was the only voice that understood the dark corridors of my soul. Much later I have realized that this band has in its invisible way had more influence on both what I do as a writer, specially the lyric poems of Ian Curtis and what I have been drawn to listen to ever since.
A few months back I went on a great nostalgia trip when it comes to music from the past. I downloaded all those bands I had on vinyl in some box, including Joy Division, and they are still totally cool. The music, the words, the voice, and through this unique sound and feelings they have influenced most of the musicians that play real music: and how much less music would be today without the existence of Joy Division......

Tomorrow night there will be a Joy Division tribute at Gaukur á Stöng, with some pretty fantastic musicians. I was asked to put together a couple of posters for the event and while I was at it I suggested I would read the poem lyrics to New Dawn Fades. A brilliant poem; a foreboding perhaps for what to come. I am both rather stressed to read it and looking forward to it. It is part of my mission to open people’s eyes to the fact that poetry is part of our lives in a far less serious manner than they think they are.

Here are the posters, if you are in Iceland, you have to come.... it will be unforgettable. 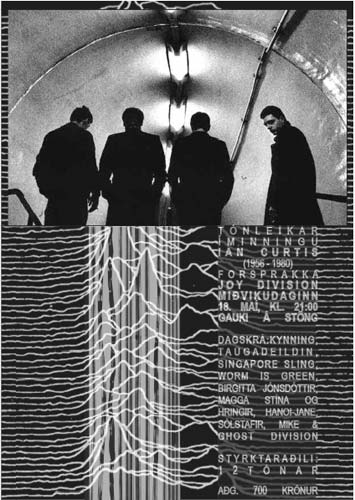 Posted by Birgitta Jónsdóttir at 9:09 AM